As far as vampire movies go… This one looks better than Dark Shadows.

The new trailer is out for Fox’s Abraham Lincoln: Vampire Hunter and it includes some new footage. The movie which stars Ben Walker is directed by Timur Bekmambetov and written byr Seth Grahame-Smith still doesn’t really excite me the way I was hoping it would. That said, it still looks a hell of a lot better than Dark Shadows.

One cool bit of news that came along with the new trailer was the announcement that FOX is planning a screening for several thousand sailors who are serving on board the Navy aircraft carrier USS Abraham Lincoln this June.

The rest of us get to see it when it comes out June 22.

Abraham Lincoln: Vampire Hunter is a re-imagining of the 16th President’s life that depicts him as an axe-throwing, highly accomplished killer of vampires — an obsession of his since those bloodsuckers supposedly took the life of his mother. Lincoln eventually learns that the vampires have fled to the southern states of the U.S. and are concocting a plan to conquer and enslave the entire country — this in turn leads to the Civil War between the Union and the Confederacy, the latter of which the vampires are aligned with. 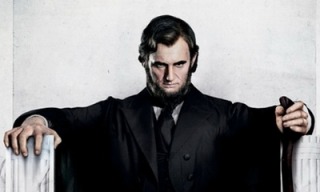