Yes. That is a horribly insensitive headline.

Yes. That is a horribly insensitive headline. No one is denying that Joseph Kony is a bad man. He’s a monster and he absolutely deserves to thrown down the world’s largest set of razor blade covers stairs into a pool of lemon juice and vinegar. That really isn’t the point here. This video still glosses over the reality of Invisible Children, the NPO that is running the KONY 2012 campaign.

The fact remains that Kony is no longer in Uganda and that the whole Night Commuter tragedy that was shown so intensely in the first video stopped in 2006 when Kony was pushed out of the country. Kony and the LRA still are doing damage, but the are down to an army of 250, a threat that could easily be dealt with if the surrounding African Governments could get their collective crap together.

Generally, the campaign has misleading and manipulative in its efforts to make apathetic hipsters care about something more than how deep their V-neck is for the next 20 minutes.

This new video, in reality, is nothing more than damage control to try and regain the credibility lost from people actually doing their own research on Kony and Invisible Children… and the fact that their leader had that whole naked melt down thing a couple weeks ago.

Here’s the official video description:
KONY 2012: Part II — Beyond Famous offers a closer look at the LRA and explores the solutions put forward by leaders of the currently-affected areas of CAR, DRC, and South Sudan, where local communities continue to live under the constant threat of LRA violence. This generation has responded to the call to make Joseph Kony famous. Now we need to dig deeper and turn awareness into informed action. That starts with sharing this film and continues with participating in Cover the Night, the advocacy and awareness event taking place worldwide on April 20th. 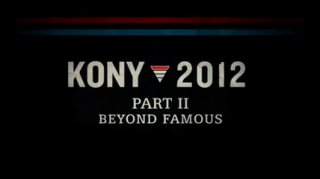