Lucille Ball Tribute Statue To Be Removed For – Ugliness

Even the artist who designed the piece, Dave Poulin, admitted that it was “By far his most unsettling sculpture.”

Lucille Ball was one of the most influential people of the 20th Century. Along with being a comic icon, most people don’t know that she was instrumental in bringing Star Trek to the Masses. You see, in her divorce to Desi Arnez, she got their production company, Desilu Studios. While other executives in the studio didn’t have faith in the show, she took interest in Gene Roddenberry and helped keep the fledgling show alive long enough to make it to broadcast. Even after NBC rejected the initial pilot in 1965, Ball was able to convince them to give the show a second chance, resulting in the second pilot to the series, titled “Where No Man Has Gone Before.”

Anyways, the point of the story isn’t her pivotal role in Star Trek, but the butt ugly statue that’s currently standing in her hometown of Celoron, NY. How bad is it? Even the artist who designed the piece, Dave Poulin, admitted that it was “By far his most unsettling sculpture.”

This weekend, the statue will be torn down and replaced with a new one from artist, Carolyn Palmer in honor of the comedienne’s 105 birthday.

As for her inspiration, Palmer said:
“I not only wanted to portray the playful, animated and spontaneous Lucy, but also the glamorous Hollywood icon. I just hope that all the Lucy fans are pleased and that Lucille Ball herself would have enjoyed this image of her.” 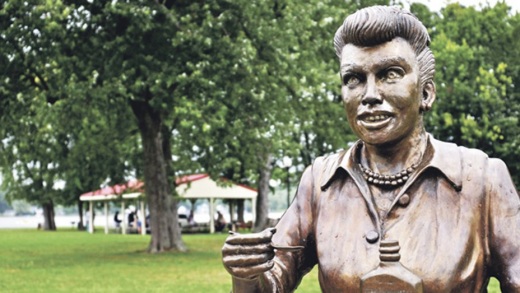 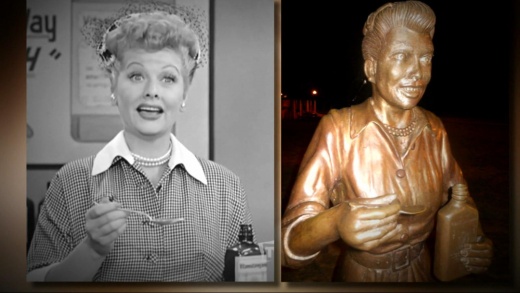