“I didn’t want to believe it. I was frightened and angry. It’s like finding out that Adolf Hitler is your father.” 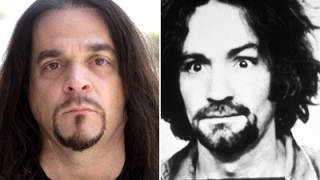 Matthew Roberts, 41, recently come forth to speak about his anguish after discovering that his long-lost father is none other than the notorious serial killer Charles Manson.

Roberts who lives in Los Angeles and bears a striking resemblance to the jailed cult leader, tracked down his biological mother after she put him up for adoption in 1968. He spent 12 years searching and eventually located his mother Terry in Wisconsin.

“I didn’t want to believe it. I was frightened and angry. It’s like finding out that Adolf Hitler is your father.

“I’m a peaceful person – trapped in the face of a monster,” says Roberts.

Roberts has since written letters to his biological father who is an inmate at Corcoran State prison in California. Manson would reply with notes and postcards signed with a swastika that said “crazy things.”

“He’s my biological father – I can’t help but have some kind of emotional connection. That’s the hardest thing of all – feeling love for a monster who raped my mother,” Mr Roberts said.