It was a brou-Ho-Ho.
A group of men wearing Santa suits got into a brawl near Union Square that was caught on video Saturday night, cops said.

“We’re looking into it,” said NYPD spokesman Sgt. Lee Jones said after the Daily News notified cops of the video that was posted on YouTube. “We don’t have any reported assaults right now. We know about it.”

The fight involving about eight men dressed as Santa Claus erupted at the corner of 17th St. and Third Ave. around 8:15 p.m., he said.

The revelers were believed to be partaking in SantaCon, an annual event that saturates pubs in parts of Manhattan and Brooklyn with drunken St. Nicks.
The gathering has been controversial as some residents have complained about drunken Santas vomiting and fighting. 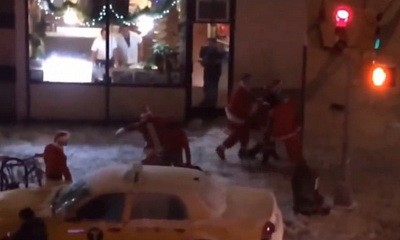