If you are going to die from gluttony, Cheesy biscuits are a fine way to do it… especially when you consider that they are free.

Red Lobster is not known for it’s high quality cuisine. In fact, where I come from, it is often reffered to as Lobster Hut. The food is pretty lack luster and the prices are higher than what they should but… but amidst all the mediocrity, there is one shining beacon of awesome that makes Red Lobster worth the trip… Cheesy Buscuits!

If you are going to die from gluttony, Cheesy biscuits are a fine way to do it… especially when you consider that they are free.

Now, it looks like one man might have taken that idea to heart. The Rocky City Times is reporting that a local food writer was rushed to the hospital after downing 413 Cheddar Bay Biscuits from Red Lobster. Doctors have confirmed that shortly after arriving at the emergency room, the man slipped into a coma.

The man, Kevin Shalin, can be seen below, eating buscuit #4. It was the first time that he’d eaten at a Red Lobster since he was 5 years old and he was immediately impressed with the flavor of the free tableside treats.

After realizing that they were free, he ate 30 of them and then asked the manager what the record was. Shortly there after, he declared that he thought he could eat 415.

Sadly, he started to feel dizzy around #412 and then collapsed on the ground and began to convulse somewhere in the middle of #413.

Doctors believe that the fat from the butter is blocking signals from his brain. The hospital has already drained 2 gallons of butter from his system and expect him to make a full recovery.

Just as a point of reference, Red Lobster’s signature Cheddar Bay Biscuits have 150 calories each and a approximately 1/8th of a stick of butter in each. That means Shalin, ate the equivalent of 51.5 sticks of butter. 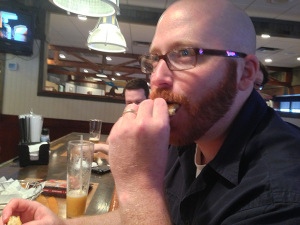