“I have had wrist and back problems from spending hours on it but it was all worth it. When I clicked that last bit into place and each face was a solid color, I wept.” 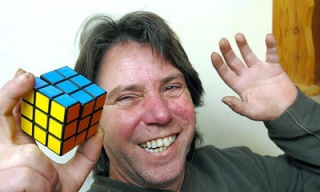 Remember your first Rubik’s Cube? You probably spent hours solving the annoying and addictive puzzle. Some of you even cheated and swapped the stickers. Well, you haven’t met Graham Parker, the most persistent Rubik Cuber in the world. You see, Graham has finally completed his puzzle. and it only took him 26 years to do it.

‘I cannot tell you what a relief it was to finally solve it,’ the 45-year-old from Portchester, Hampshire, said. ‘It has driven me mad over the years – it felt like it had taken over my life.

‘I have missed important events to stay in and solve it and I would lie awake at night thinking about it.

‘I have had wrist and back problems from spending hours on it but it was all worth it. When I clicked that last bit into place and each face was a solid colour, I wept.’

Wife Jean, 47, said it had felt like there had been three people in their marriage.

‘When I met Graham, he was already obsessed with the cube – spending hours on it every day,’ she said. ‘I have often thought about getting rid of it but I knew he would not rest until he had solved it.’

A Rubiks Cube Spokesman said that this was the longest it has ever taken anyone to finish the cube. We here at the Wookie know that just is not true, but he’s the only one dumb enough to admit it.