A cat called Stewie has broken the Guinness world record for being the world’s longest domestic moggy.

In all it’s more than four feet long (1.16metres). The previous record was held by a 48-inch moggy.

The owners of Stewie, Robin Hendrickson and Erik Brandsness of Reno, Nevada, said they decided to try for the record after hearing numerous people say they were amazed by his length. Stewie is of the Maine Coon variety – known as ‘the gentle giants’ of the cat world. 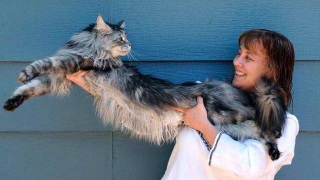