Like something from “The Kingdom of the Crystal Skull,” a Peruvian anthropologist has discovered the remains of an unidentified creature with a “triangle shaped” alien like skull.

Like something from the recent Indian Jones movie, “The Kingdom of the Crystal Skull,” Peruvian anthropologist Renato Davila Riquelme has discovered the remains of an unidentified creature with a “triangle shaped” alien like skull nearly as large as its 20-inch-tall body.

It has a non-human appearance because the head is triangular and big, almost the same size as the body. At first we believed it to be a child’s body until Spanish and Russian doctors came and confirmed that, yes, it’s an extraterrestrial being.

However, even if the remains are almost of human origins, they are certainly unique and one of a kind. Take a look at the gallery below and see for yourself. 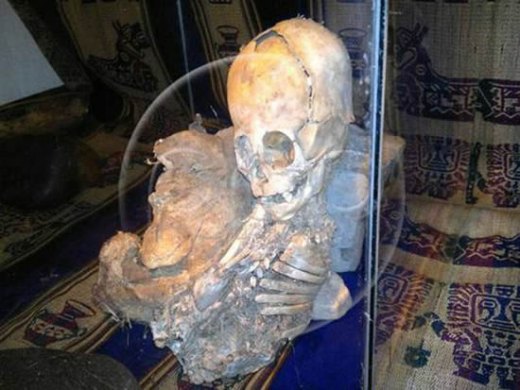