The story of the flag’s return is shrouded in as much mystery as its disappearance.

One of the most iconic images from September 11th was the image of the firemen raising a flag amidst the rubble. However, in a strange turn of events, the flag went missing and was assumed lost to history. Enter Brad Meltzer, best selling author and host of H2’s show, Lost History. He had set out to find the flag, featuring it on an episode of his series. Now, the search is complete and the flag is back in NYC, where it will find a new home at the 9/11 museum on Thursday.

Here are the basics of what happened, from the beginning. To start off with, the flag didn’t survive the towers’ collapse like many people assume. It was brought there by three firefighters, Billy Eisengrein, George Johnson and Dan McWilliams. The commandeered it, and the pole it was on from a yacht that was moored in a marina on the Hudson River. That’s where things get messy.

People thought that the flag was displayed at a Yankee’s game and then sent off to some naval ships in the Middle East. When that flag returned in 2002, it was even signed by Gov. George E. Pataki and Mayors Rudolph W. Guiliani and Michael R. Bloomberg. However, that wasn’t really the flag!, This one was actually several feet larger than the one removed from the boat.

At that point, the flag was assumed to be lost to history, that is, until Meltzer featured it on the very first episode of his show, “Brad Meltzer’s Lost History,” in late 2014. Just four days later, a man walked into a police station in Washington State, carrying a plastic bag that he said was a flag from September 11th.

The firefighters who took possession of the flag from Brian then decided to investigate the flag to see if it had any historical significance. When the firefighters tried to find Brian for more information, he had disappeared. Even a sketch of his face in the local paper yielded no results in finding him. They also followed up with NOAA, but could not find anyone in the organization who admitted to ever having this flag.

The full story of the the flag’s journey back to its home will be revealed on a TV special this Sunday on the History Channel. 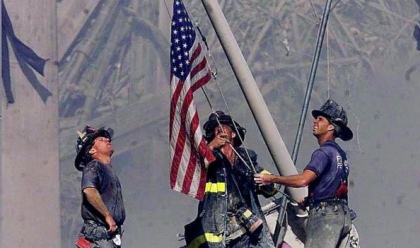