NASA has been busy lately. Just yesterday, we reported on their plan to punch a hole in the Yellowstone Caldera. Today they are talking about generating oxygen on Mars!

NASA has been busy lately. Just yesterday, we reported on their plan to punch a hole in the Yellowstone Caldera. Today they are talking about generating oxygen on Mars!

Sadly, we aren’t talking about terraforming the whole planet or anything like that. This is more about creating localized oxygen supplies for the astronauts who take the next step in space exploration on our first manned trips to the red planet.

The device that they’ve created is built into the Mars 2020 Rover and is named MOXIE, which is short for: Mars Oxygen In-Situ Resource Utilization Experiment device. The device should be able to generate enough oxygen through electrolysis that humans will be able to use it for both breathing and rocket fuel. 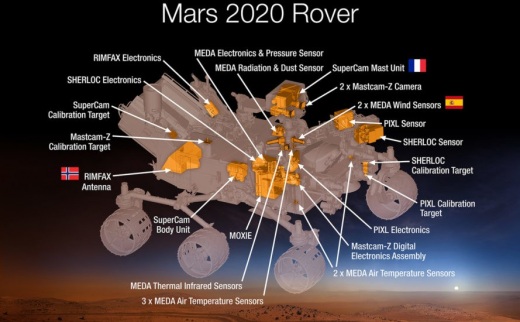 While there is currently some oxygen on Mars, carbon dioxide (CO2) is the dominant environmental gas, making up 95% of the planet’s atmosphere. Using a small fuel cell, they’ll be able to split the carbon from the oxygen

percent of Mars’ atmosphere is comprised of CO2. A laser could ‘slice off’ the carbon atom in CO2 to leave O2 behind. But NASA’s going with another method: electrolysis, or using a fuel cell to split up the oxygen and carbon atoms. After an hour, it should yield .022 LBS of Oxygen.

If the test is successful, NASA may consider sending a unit 100x the size for human explorers to utilize on their expedition.