If you’ve caught the Pete Holmes show after Conan, you’ve probably been pleasantly surprised. While some of his sketches have been a little hit or miss, his comic book based sketches have been hilarious, especially the series of sketches where Professor X sits down and fires an X-Man. So far, we’ve seen Wolverine and Gambit fall to the hammer of Charles Xavier. Today, we get to see what happens when he calls Warren Worthington, AKA Angel in for a chat. 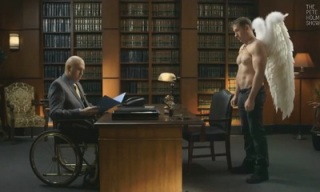