A new billboard campaign which began this month around Moscow has been drawing fierce local criticism.

A new billboard campaign depicting a sleeping baby with a cigarette put down against her back which began this month around Moscow has been drawing fierce local criticism.

The ad which translates, “Smoking in child’s presence is a much bigger torture for him. You don’t care?” has been harshly condemned by the Committee for City Advertising. Outraged specialists of the committee believes that it went beyond the framework of ethical norms and promoted abuse of children.

Many Muscovites said that they found the billboards revolting.

The ad agency is undeterred however, with a spokesperson saying:

“Any normal person will be disgusted with what the picture shows. But if thousands of children have a chance to stop inhaling tobacco smoke every day, we believe we could sacrifice our visual comfort for that. When a smoker lights up a cigarette in children’s presence, she should realize the pain that her habit causes to them. We believe that this campaign sends a strong social message that leaves no one indifferent.” 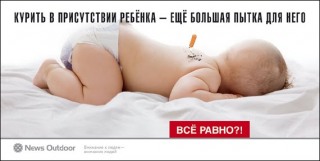