The Kayentapus ambrokholohali, was probably ten feet tall at the hip and close to 30 feet long from tip to tail.

It’s pretty amazing to think that there are still dinosaurs that haven’t been discovered yet by paleontologists, but the ground still holds an untold treasure trove of dynamic dinos just waiting to be revealed. The newest addition to the fossil record comes to us from the the African savanna where the fossilized footprints of a previously unknown “mega-carnivore” were located in Lesotho.

researchers have dated the footprints to around 200 million years ago, in the early part of the Jurassic period. Based on what they’ve discovered so far, they think that it was probably on par with the T-rex or Allosaurus, but it looks like this beastie may have actually been the first of the group to ever roam the planet. Measuring at a whopping 22-inches-long and 20-inches-wide, the footprints are the largest of fossil their kind ever found in Africa.

Based on what they’ve been able to determine from the fossil, they think the new Therapod, which has been given the spicy name of Kayentapus ambrokholohali, was probably ten feet tall at the hip and close to 30 feet long from tip to tail. By comparison, National Geographic says that the T-Rex is “about 40 feet (12 meters) long and about 15 to 20 feet (4.6 to 6 meters) tall.”

While this finding was the first one significant enough to warrant a name, researchers also note that similar tracks have also been located in Poland. 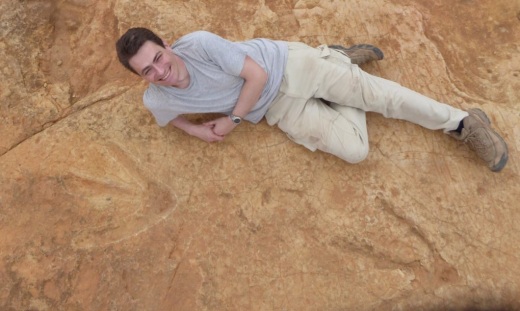