Alex and Donna Voutsinas were gathering photos in preparation of their wedding when Alex noticed something in one of Donna’s childhood photographs.

Alex and Donna Voutsinas were gathering photos in preparation of their wedding when Alex noticed something in one of Donna’s childhood photographs. It was a photo of Donna when she was 5. A photo that was taken 20 years ago that also included a picture of Alex’s father pushing Alex in a stroller!

After visiting his mother’s house, Alex found photographs from the same day in which he and his father were wearing the same clothes, confirming that they were indeed the people in Donna’s photo.

What makes this story even more incredible, is that at the time the photo was taken, Alex and Donna lived in different countries, with Alex living in Montreal and Donna living in Florida.

They eventually met each other at work and fell in love.

“Just to be in the same picture with my wife when we were basically toddlers, it’s unbelievable,” Alex Voutsinas said.

“I was glad he proposed before the picture,” Donna said, “because I know that it’s because he loves me and not because he thought it was meant to be, it was fate.” 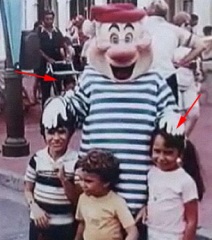 You can watch the news report of this incredible story below: