Some people think this was just a harmless mistake. I think it’s Santa telling us we’ve all be EXTREMELY Naughty.

Some people think this was just a harmless mistake. I think it’s Santa telling us we’ve all be EXTREMELY Naughty. Either way, this 80′ tall inflatable Christmas tree in Paris has some anti-gay activists puckered tighter than a teenage boy watching the movie “Teeth” for the first time.

It was created by LA-based artist Paul McCarthy, and was just erected in Place Vendome, near Paris city centre. From the moment it went up, anti-gay groups like Printemps Francais, have been screaming that it must come down due to its resemblance to a sex toy. They also went as far as to say that its existence has “disfigured” Paris.

Meanwhile, French people at large seem to take the whole thing in stride. One man even joked, “Frankly it’s more appropriate to have a giant buttplug in the middle of Paris than to have a Christmas tree up in October”. 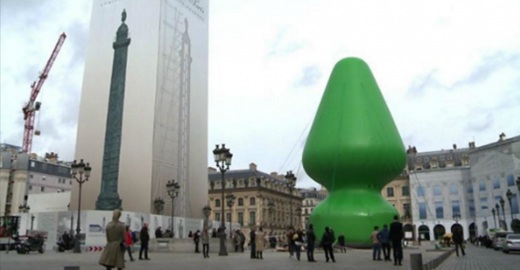