Aaron Henson was arrested and placed in handcuffs for failing to pay a $27 late fee. His crime? Never returning a DVD he’d checked out, and a warrant was issued for his arrest. 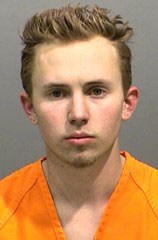 Aaron Henson was arrested and placed in handcuffs for failing to pay a $27 late fee. His crime? Henson never returned the DVD he’d checked out of the Littleton library, and a warrant was issued for his arrest.

After spending eight hours in a county jail, during which time he was fingerprinted, photographed and booked, Henson’s father bailed him out. He had tried calling his mother for help, but she didn’t seem to believe him, telling Henson there was no “book police.”

But indeed there is. Towns across the county, frustrated with trying to replace wayward materials on a shoestring budget, have turned to issuing citations, court appearances, even reporting the offending library patron to their credit bureaus.

City spokeswoman Kelli Narde said Littleton lost $7,800 in lost library materials in 2009, including Henson’s DVD. They issued 81 summonses for failure to return library materials, she said. “And 80 of them were resolved without a problem.”

“I made the comment, ‘This has got to be one of the stupidest arrests you’ve ever made,'” Henson said.