And the Cat Came Back… The Very Next Decade

The owners looked everywhere for the cat, even checking out several shelters and sending letters to veterinarians describing George. 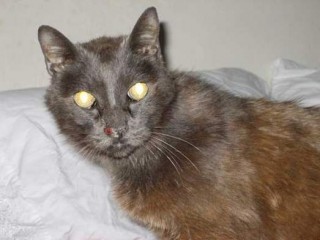 Yahoo news reported on a great story for anyone who has a pet. George the cat returned home to his owners after thirteen years missing.

It seems that George was last seen 1995 when he was turned into an animal hospital after the manager of a mobile home park trapped the cat. Melinda Merman, one of the owners looked everywhere for the cat, even checking out several shelters and sending letters to veterinarians describing George.

Thankfully, Melinda had the forethought to chip her cat and that was what eventually helped trace George back to his home.

George weighs less than half what he used to, but Merman said the cat is now eating well and displaying some of his old behavior, like jumping at flickering light on the wall the way he used to.