“There’s a spiritual reality to it and Hasbro is treating it as if it’s just a game… It’s not Monopoly. It really is a dangerous spiritual game…” 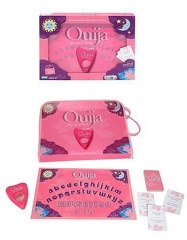 The Ouija board game has been a popular staple sold by Hasbro since 1967, but recently their decision to market and sell a pink Ouija board has pissed off more than just angry spirits. But angry Christians.

The special hot pink edition released two years ago that gets tweens to call on “spirits” to spell out answers to life’s pressing questions has irked Christians who say the mysterious product is a “dangerous spiritual game” which attacks ones soul.

“There’s a spiritual reality to it and Hasbro is treating it as if it’s just a game,” said Stephen Phelan, communications director for Human Life International, which bills itself as the largest international pro-life organization and missionary worldwide. “It’s not Monopoly. It really is a dangerous spiritual game and for [Hasbro] to treat it as just another game is quite dishonest.”

Phelan, who has never played the game, said the Bible explicitly states “not to mess with spirits” and that using a Ouija board will leave a person’s soul vulnerable to attack.

Asked how the game differed from magic kits or Harry Potter-themed merchandise, Phelan replied, “The difference is that the Ouija board is actually is a portal to talk to spirits and it’s hard to get people to understand that until they actually do it. I don’t pretend to know how it works, but it actually does.”

Phelan also noted that the pink version of the game is explicitly marketed to young girls who may want to partake in “something dangerous” during a late-night sleepover.

Toy expert and consultant Chris Byrne said he found “absolutely nothing” wrong with any version of the game.

“And if something doesn’t fit your value or belief system, you don’t have to buy it,” Byrne said. “There’s absolutely nothing remotely Christian or un-Christian about it. I think people are projecting their belief system on it.”

Hasbro officials say they have received a “couple of dozen” complaints following a recent report on the pink version. Patricia Riso, a Hasbro spokeswoman, defended the game as, well, just that.

“Our response is that Ouija is simply a game — and it is intended purely for fun and entertainment,” she wrote FoxNews.com.

Bob Friedland, a spokesman for Toys R Us, said the pink Ouija version has been on clearance at its locations and is being “phased out” moving forward as new products are being introduced this year.

“There are very few pieces in our inventory in store and it is no longer available online,” Friedland wrote.

In a statement to FoxNews.com, the Toy Industry Association said the game is among thousands of options to bring “fun and excitement” to children.

“TIA encourages parents to make their own choices about which products are most appropriate for their families,” the statement read.

Byrne, meanwhile, said the current version of the game is not much different from the first Ouija-like game first patented by patent attorney Elijah Bond in May 1890.

“It’s been a popular toy for years, and I’ve played it and I don’t do any Macbeth-like witchcraft,” he said. “It’s no different from watching a scary movie or a good ghost story.”