Pull Up A Chair For This Delicious Game of Thrones Feast!

from roasted pig heads to a sword throne cake, this meal has everything!

This started as a post about a Game of Thrones cake, but as I searched my way back to find out where it came from, I stumbled upon this amazing looking Game Of Thrones themed Banquet from a Gastro Pub (I think in the UK) called Gastro Park.

The feast included:
-Three suckling pig’s heads
-Fallen eyeballs and bleeding stag (a log with arrows sticking out of it impaling seared venison pieces with “dripping fake blood dressing” made from bonito, soy and ginger, Olive and bread “soil” dressed with white balsamic vinegar dressing, roasted vine tomatoes, French breakfast radishes and eyeballs filled with liquid Mozzarella.)
-A Soup of Crushed Skills and Raven Feet (The raven motif is represented with claws which are squid ink battered piquillo peppers cut into a raven claw shape and deep fried until crispy. It is served with a garlic potato galette shaped into a small skull and a “raven broth.”)
-Chunk of wild cooked pig served on Godswood log (A leg of pork with a wood patterned rind, a generous separate chunk of crackling served with a split log, moss and roasted fruit.)
-Textural dessert of the Land with Dragon Eggs and Liquid Gold (On one side there is edible earth aka dark chocolate ”mud”, a rich velvety chocolate pudding, three golden honeycomb nuggets, crumbled buttery soft chestnut shortbread sand and ginger cake soil. Liquid gold is poured all over this which is actually a liquidy orange curd and a dragon’s egg, filled with two oozing layers of passionfruit curd and vanilla custard in a beautifully thin layer of white chocolate which was sprayed with metallic edible paint is gently placed atop.) 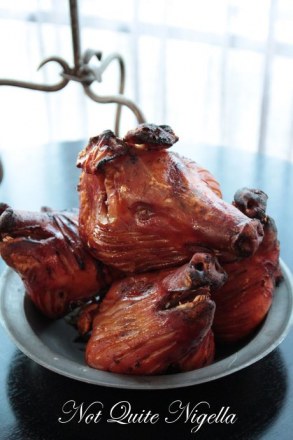 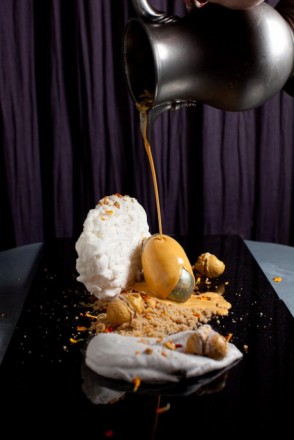