Super rare footage from Jerry Lewis’ unreleased movie about a clown in a concentration came during the Holocaust has finally found its way online.

A good friend of ours sent this over tonight, and we had to share it with you. There are few movies that people consider to be of holy grail status. Jerry Lewis’ The Day The Clown Cried is one of them. Why? Because it was never released and, if Lewis has anything to do with it, it never will be.

If you’ve never heard of the film, it is not your normal, Nutty Professor type of Jerry Lewis movie. The film tells the tale of washed up circus clown Helmut Doork. During WWII, Doork is arrested by the Gestapo for getting drunk and ranting against the nazis and imprisoned in a concentration camp. While in the camp, he’s often forced to perform for and beaten by nazis. One day, he sees a group of Jewish children in the camp.

As fraternizing with the Jews is forbidden, he’s beaten and then thrown in solitary until the head nazi at the camp assigns him the duty of using his clown talents to load the Jewish children in and out of the trains bringing kids to the concentration camp. Eventually, he ends up using his talents to help lead children into train cars leading the kids directly to Auschwitz and the gas chambers.

In the end, he follows the children into the chamber and the movie ends.

With that kind of a story, you can imagine why it hasn’t been released. That said, I’ve been wanting to see this movie for years. Now, we don’t have the movie, but we do have a little bit of behind the scenes footage. Check it out below: 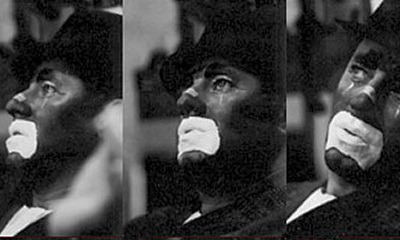