Step Two… you put your ass in a box?

It’s always good fun to see a reporter crash and burn when interviewing a big celebrity. Things jump to a whole new level, however, when they give that celebrity a plastic reproduction of their butt cheeks.

That is exactly what happened during a very awkward interview for Justin Timberlake while he was promoting his new film, Runner Runner.

The reporter was Sabrina Sato from “Panico na TV.” The language barrier was the first thing that killed the interview, the second thing was the set of very strange things she was saying like how Timberlake dances like a “Black American.”

Things finally went overboard when she handed him a gift, a replica of her butt, in a box. Thank God she wasn’t trying to replicate his SNL hit or this video could have gone in a very disturbing direction. 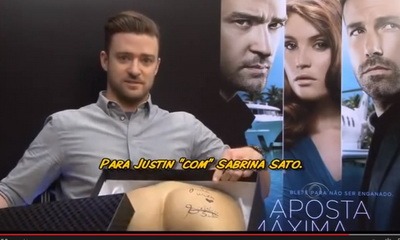