“I know something was wrong with a pretty little white girl runs into a black man’s arms. Dead Giveaway.”

There’s a good chance that, by now, you’ve heard the news reports about the three women: Amanda Berry, 27; Georgina “Gina” DeJesus, 23; and Michelle Knight, 32, who were freed after over a decade of captivity by three brothers who we won’t bother to name here because they aren’t worth the key strokes.

What most people haven’t heard is the complete interview with the neighbor who saved them. Sure, you’ve heard the first part of the interview, where Charles Ramsey talks about how he put down his McDonald’s so that he could help kick in the bottom of the door and get Amanda Berry to freedom. What most news stations aren’t playing is the part that is destined to be autotuned and become a YouTube sensation.

Watch the whole thing below and learn about how skinny the girls looked and how he knew they were in trouble because:

“I know something was wrong with a pretty little white girl runs into a black man’s arms. Dead Giveaway.” 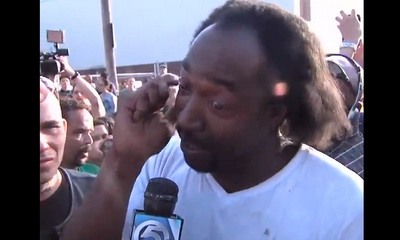