YouTuber Riceboyliu is hitting the net hard with a rap video that will offend the politically correct, but will make everyone who doesn’t have their head’s up their butts laugh out loud.

YouTuber Riceboyliu is hitting the net hard with a rap video that will offend the politically correct, but will make everyone who doesn’t have their head’s up their butts laugh out loud. His stereotype rap hist 11 different nationalities with just about every preconceived idea that people have about them. Take a couple minutes and check it out.

Official Description:
My websites for anyone who’s interested:
http://www.facebook.com/riceboyliupage?ref=ts
https://twitter.com/#!/Riceboyliu

I’m being told that I might receive a Nobel Peace Prize for creating this piece of art because of its powerful message and ability to bring human beings closer together, as well as because it has absolutely nothing racist, offensive or discriminatory in it whatsoever. Nelson Mandela and the Dalai Lama have both praised my work, calling it “a symphonic masterpiece for humanity” and “some dope ass shit.” So, I feel pretty cool about that.

I definitely wasn’t going for 100% realism and authenticity with the accents or the people portrayed, as you can probably tell. Everything is very stereotypical because every group of people has a few stereotypes and so, I thought I’d bring those out to make each accent more recognizable and to have a little fun with them. It’s all about the fun, man. If you want to still leave feedback on how well I did my accents though, go right ahead!

Special thanks to KrissKrOssProduxionz for producing the beat and to TheBlankCards for filming. The song was written and mixed by me. All vocals were provided by me. The video was directed and edited by me. Thanks for watching and stay tuned for future stuff! 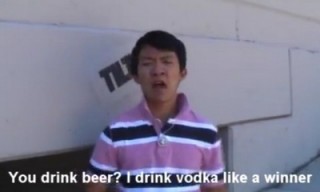