This trailer is awesome I can’t wait to see the full seven minute film when it comes out.

I love when VFX companies actually create real short films to show the artistic reach of their new software. Robot VFX just created this trailer for a seven minute short film called Fugu & Tako with director Ben West. It tells the story of a couple of Japanese white collar workers who get a little bit more than they asked for when they complain that their sushi doesn’t taste fresh enough. 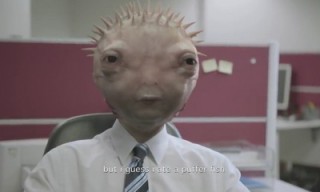 Official description:
Robot vfx has just made a short film, FUGU & TAKO, around 7.5 minutes long that follows the story of two Japanese salary men whose lives radically change when one of them eats a puffer fish in a sushi bar.
The film was written and directed by Ben West and has over 60 visual effects shots.

“Our primary software is Houdini. We used it for its procedural workflow for everything from character animation to effects. All the animation was completed in Houdini with a specific facial rig used to match the actors’ performance and enhance where required. Dynamics were used extensively throughout to give a more naturalistic feel to the animation. Modelling of the head was done with Mudbox based on multiple scans of the actors head. We utilized vector paint to create multiple and complex displacements like the ears and spikes. We also created multiple texture maps for specific shaders”