Princess Of The Magical Tears – An Animated Short

A Disney doyenne restores a man to life with her tears, and this gift is subsequently exploited.

Brian Carter is a 4th year animation student in the legendary Calarts program. Every year, the students have to make their own film and Brian’s 4th year film is nothing short of awesome. Dark and twisted yes, but definitely awesome.

In the film “The Princess of Magical Tears”, he takes the idea of the typical Disney Princess with a magical power like the ability to bring someone back to life with her tears and turns it into a very dark and funny little comedy.

A Disney doyenne restores a man to life with her tears, and this gift is subsequently exploited.
Original Score by Hillary Thomas
The Princess – Megan Therese Rippey
The Prince and the Jester – Robert Duncan
The Guard – Michael Rianda

Here’s a look at Carter’s third year film. It is amazing to see how much more he’s been able to accomplish in a year’s time. 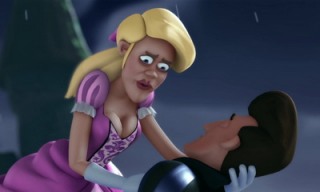