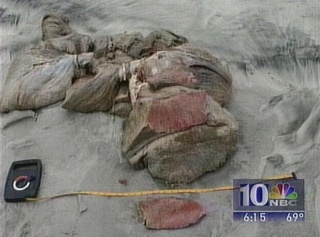 Mystery meat is more than just a cafeteria memory. The residents and police in Brigantine, New Jersey are dealing with chunks of the stuff that keeps washing up along the pristine and crystal clear waters of the Jersey shore.

Chunks of some sort of massive marine creature have been discovered strewn across the sand of a Brigantine beach. Bob Schoelkopf, of the Mammal Stranding Center, said the largest piece was 5 feet long.

Schoelkopf said it was as if “someone had blown up an animal and it floated to shore.”

Some experts from the Stranding Center who came to investigate the unusual remains said they could be internal organs, possibly from a huge whale or shark. But they can’t really be sure until DNA tests come back.

“We’ve had some strange things come up, but this is a baffling one,” Schoelkopf said.

Pieces also may have been found along the Delaware coast, he said.

“This is a real mystery to us,” Schoelkopf said.