“Before re-ionization, these galaxies were very hard to see, because their light is scattered by gas between galaxies, like a car’s headlights in fog.”

Scientists are reporting that they’ve been able to capture the dawn of recordable time time. They were able to accomplish this using a dark energy camera that is part of the -meter Blanco Telescope, at Cerro Tololo Inter-American Observatory (CTIO), in northern Chile. In the image, we can see the birth of 23 new galaxies that began forming in the half billion years directly following the big bang. The image is possible because of the “re-ionization.” Astronomer Sangeeta Malhotra explains:

“Before re-ionization, these galaxies were very hard to see, because their light is scattered by gas between galaxies, like a car’s headlights in fog.

“As enough galaxies turn on and ‘burn off the fog’ they become easier to see. By doing so, they help provide a diagnostic to see how much of the ‘fog’ remains at any time in the early universe.

“Several years ago, we carried out a similar study using a 64-megapixel camera that covers the same amount of sky as the full moon.

“The Dark Energy Camera (DECam) by comparison, is a 570-megapixel camera and covers 15 times the area of the full moon in a single image.” 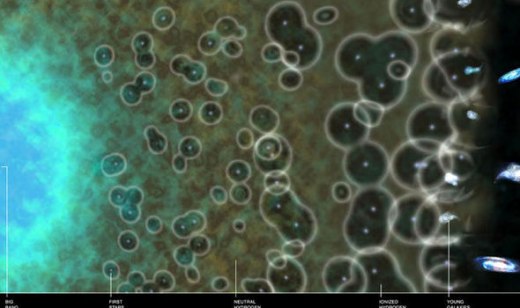