“This is the first case that I’m aware of in which a Facebook update has been used as alibi evidence.” 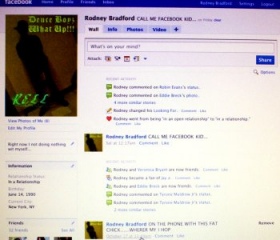 19-year-old Rodney Bradford wrote in his Facebook “Where’s my pancakes” on Saturday, Oct. 17, at 11:49am, from a computer in his father’s apartment in Harlem.

The next day, Bradford was arrested as a suspect in a robbery. His Facebook status that he had mindlessly written before, suddenly took on a level of importance becoming his only alibi.

His defense lawyer, Robert Reuland, told a Brooklyn assistant district attorney, Lindsay Gerdes, about the Facebook entry, which was made at the time of the robbery. The district attorney subpoenaed Facebook to verify that the status update had actually been typed from a computer located at 71 West 118th Street in Harlem, as Mr. Bradford said. When that was confirmed, the charges were dropped.

While it was acknowledged that anyone who knew Mr. Bradford’s username and password could have typed the Facebook update, the courts ultimately decided that it was unlikely in this case.

“This implies a level of criminal genius that you would not expect from a young boy like this; he is not Dr. Evil,” Mr. Reuland said, adding that the Facebook entry was just “the icing on the cake,” since his client had the other alibis.

“This is the first case that I’m aware of in which a Facebook update has been used as alibi evidence,” said John Browning, a lawyer and member of the Dallas Bar Association who studies social networking and the law. “We are going to see more of that because of how prevalent social networking has become.”

Mr. Bradford, who has since had his case dismissed is staying in Harlem with his father. He is thinking about hanging around with a different crowd and going back to school to become an electrician. Meanwhile, his friends have taken to calling him the “Facebook Kid.”

As for those pancakes: “I used to really like them,” Mr. Bradford said. “Now I love ‘em.”