A Spider-Man impersonator was arrested after an incident in which he allegedly slugged a man near the Hollywood and Highland complex. 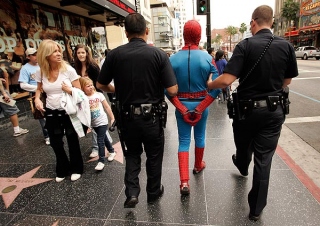 Spider-Man, hero or menace? Looks like J.J. is getting the last laugh even if it’s not the real Spider-Man

A Spider-Man impersonator was arrested on outstanding criminal warrants after an incident in which he allegedly slugged a man near the Hollywood and Highland complex in Los Angeles.

It was not immediately clear what led to the altercation. But it’s the latest in a string of incidents involving costumed comic book characters and celebrity lookalikes who vie for space — and attention — along the tourist-filled corridor that includes Grauman’s Chinese Theater.

Christopher Loomis, 39, was being held on outstanding misdemeanor warrants in lieu of $5,500 bail, police said.

The incident occurred when when LAPD patrol officers received a radio call reporting a battery by a man in a Spider-Man costume. When they arrived, they encountered four different people dressed as the web-slinging crusader.

“They stopped one, it wasn’t him,” LAPD Lt. Beverly Lewis said. “They stopped the second, and it was the suspect.”

The victim, who said he was hit in the face and arms, refused to press charges against the costumed impersonator. But Lewis said that when they discovered the warrants, he was booked. She said it appeared the suspect and victim knew each other.

Costumed impersonators portraying the likes of Elvis, Superman, SpongeBob SquarePants and others have worked on Hollywood Boulevard for years. They collect tips from tourists by posing for pictures or performing in front of the theater.

It’s not alway fun however as tourists have complained that some costumed characters turn abusive when the tourists refuse tip them for posing for pictures. Several fights have also broken out among costume impersonators. Two years ago, authorities convened a “super-hero summit” designed to reduce tensions among the performers.

“Typical Hollywood; it’s always something different,” said the LAPD’s Lewis. Loomis, still wearing his Spider-Man outfit, sat nearby, handcuffed to a bench in the Hollywood Station.