Sesame Street: Me Want It (But Me Wait) Parody Of Icona Pop’s “I Love It”

Holy Crap! Sesame Street has been around for 44 seasons?!?!

Holy Crap! Sesame Street has been around for 44 seasons?!?! Well, I guess it has only been around for 43. Season 44 starts next month. As always, PBS is revealing some clips from upcoming season to not only get fans excited, but to also show that they have decided that they still think the key to their pop culture relevance is to make parodies of things way too old for the kids who watch it to understand.

Recent examples of this would be their parodies of Mad Men and True Blood. This season, they’ve got stuff like this parody of Icona Pop’s “I love it” be Cookie Monster (which does at least teach kids about self control), and a sketch that parodies Sons of Anarchy. Check them both out below. 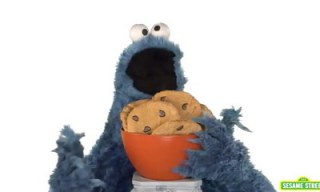