Apple or PC, who do you choose?

The Epic Rap Battles in History series is a phenomenon unlike almost anything else on the internet. The monthly YouTube rap series rakes in over 25,000,000 views per episode and the newest battle just hit the net a couple of minutes ago.

The newest rap battle is one of the biggest rivalries of the modern age, Bill Gates vs Steve Jobs. It’s a question we all have to deal with… I’m sitting here now on a PC, but my iPhone is nearby.

Which billionaire tech genius do you think wins this new battle? 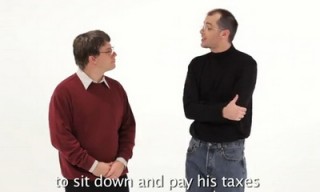