Alexandre Nicolas a very talented artist with a very unique perspective on things. A lot of his art involves encasing things in large plastic blocs, but it is his latest project that seems to be getting the most attention – Fetuses.

Alexandre is currently exhibiting his latest line of embryos at the HEY! modern art and pop culture gallery in Paris. He’s managed to give us a new take on heroes like Superman, Spider-Man and even The thing. It is pretty odd that he’s included costumes on the pre-natal versions of the super heroes, but what is even more odd is that he decided that Hitler should be included in the exhibit. I’m not sure if he was just making a statement on the potential of fetuses to become anything both great or evil, or if he was saying that he thinks of Hitler as a hero. I’m hoping that it is the former. 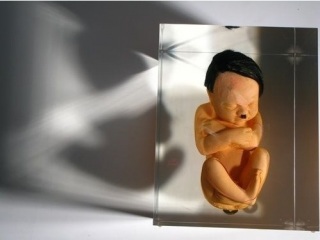 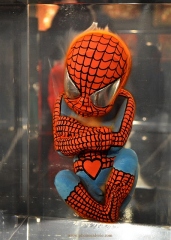