“Climb-a da beanstalk, take da coins and now I’m a really on a roll,
When I finish slide the flag a-down the pole!”

If you’ve been reading this site for a while, you’ve probably heard of Jon & Al Kaplan, better known as Legolambs. They’ve become major internet celebs by creating musical versions of all of your favorite films (most notably, Silence Of the Lambs The Musical). Now, they are back with the Super Mario Opera, as performed by an elementary school chorus, with Jon & Al’s mother accompanying on piano.

It’s a-me, Mario!
It’s a-me, Mario!
So I’m off to find the princess, magic mushroom make-a me tall,
Then I pick a pretty flower, it a give me fire-ball,
But the turtle he a-touch me and I’m back to being small,
And I got to be a-careful not to–

It’s a-me Mario!
It’s a-me, Mario!
I’m-a jumping on the goomba
And I make him go a-squish,
Then I’m swimming under water with the pesky jelly fish.
These a two-a Hammer Brothers, they a difficult to kill,
And the cannons, they a shoot the Bullet Bill!

Now I run away from Lakitu,
He chase me in the cloud.
Try to go inside the tunnel but, a-no I’m not allowed.
Climb-a da beanstalk, take da coins and now I’m a really on a roll,
When I finish slide the flag a-down the pole!

Now I jump up on the ceiling cause this level really tough,
I a-take the magic warp-a zone and skip a lot of stuff.
I will find-a you a-princess and-a make-a you my wife,
Oh a-wait I got to chase the extra-life! 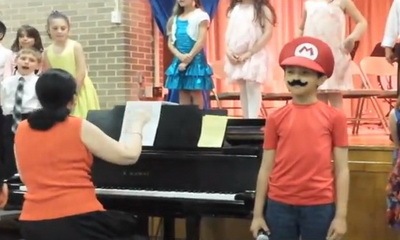