The newest Lonely Island video is out and this one, while it doesn’t make much sense, sure does have a lot of star power in it. Along with the members of the group, this video also features Robyn, Sean Combs, Paul Rudd, and Sarah Chalke.

Lyrics:
Intro]
Party people (party people)
We have taken control of your minds (your minds)
So get on the floor (oh yeah)
‘Cause it’s time to kick up dirt, now let’s work

[Verse 2]
On the floor, ladies shake that ass
Shake that, shake that ass, work it, twerk it, drop it fast
Fellas, whip your dick out – whip, whip your dick out
Indiana Jones and whip your fuckin’ dick out
Now punch your friend – punch, punch your friend
Get on the fuckin’ floor and punch your best friend
Your butt look flat – make that shit flap
Use the art of perspective, or hide it in a hat
Go stupid, get stupid – because we said to do it
Go dumb, eat garbage – we goin’ kindergarten

[Verse 3]
Yeah – you know, some of it might seem strange
But don’t think, just obey
Let the music play, ’cause we put it in the song
So do everything that we say

[Verse 4]
Have a motherfuckin’ baby on the floor
Raise it in the club, homeschool it by the door
Now be ambidextrous – fuckin’ ambidextrous
We’ll come around and test you
It’s no biggie on our checklist
Now ladies, whip your dick out – whip, whip your dick out
Don’t ask how, just fuckin’ figure it out
Now make your booty speak – teach that ass English
Make it suck helium and (talk like this)
Now eat the banana – potassium for stamina
Then build a school, burn it down
Get on the floor and do it now
Fuck a house, eat a shoe, all because we told you to

[Verse 5]
So raise your glass, then break the glass
Then stomp your bare feet on the glass
Champagne perks, popping mollies
Middle fingers up, now chop ‘em off

[Outro]
Then pose nude for a family friend
(And never speak of it again)
The party’s here, and you can’t escape
(So just do everything that we say)
Go Tommy, be brainless
Here we are, entertain us
Get stupid, go moron
We goin’ kindergarten 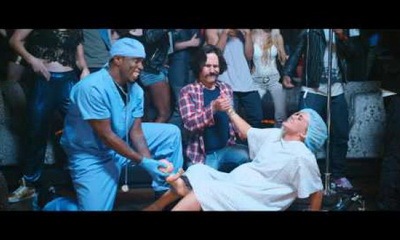