Falling through the deck was probably the most memorable part of their prom nights… you know, not counting the ones who got laid.

Move over planking, the hot new trend seems to be falling through structures during your prom photos. At least that was the case for the kids from Churubusco High School in Fort Wayne, Indiana. The funny thing is that falling through the deck was probably the most memorable part of their prom nights… you know, not counting the ones who got laid.

Here’s what one of the girls had to say about it:
“We were waiting on our friend, she was running late, so we were waiting for the 13th person, and as we were all waiting up there, we saw her come, she went actually under the balcony first,” Tori Harris, one of the students, told WANE-TV. “And then as she was coming around the corner, we heard a really loud crack and then we basically all fell through.”

Churubusco Prom Deck Collapse
*You don’t need to watch more than the first 12 or so seconds of this vid. The rest is just the mom running around with it pointing at the ground.

This wasn’t the first time this happened during the 2012 Prom season. Just a few days earlier, a group of teens were taking their prom photos on a small dock when it collapsed under them.

Prom-Goers Plunge Into Lake While Posing For Pics 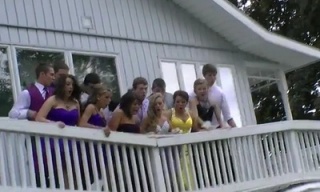