Whoa, check out this amazing R2-D2 cooler modded into a retro gaming machine equipped with a projector and an integrated sound system.

Whoa, check out this amazing R2-D2 cooler modded into a retro gaming machine! The R2-D2 cooler consists of eight gaming consoles and even a projector mounted in the head just like the “real” R2-D2. There’s also an integrated sound system to accompany the head-mount projector. I can’t help but wonder how much better the mod would be if it had wireless controllers or one wireless universal gaming controller though. Now there’s an idea for second revision! 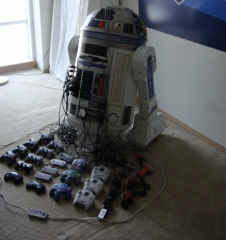