Helen Hodges, understood the need for a gas station clerk to write her identifying information on a sales receipt. But what she doesn’t understand is the ‘big fat’ part. 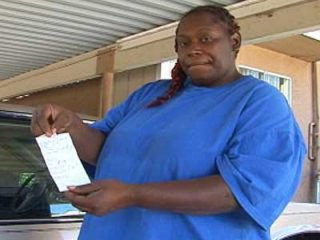 Helen Hodges, 31, understood the need for a gas station clerk to write her identifying information on a sales receipt. She even understands the ‘black lady’ part, but what she doesn’t understand is the ‘big fat’ part.

The incident happened Thursday night at the station on Marconi Avenue at the Capital City Freeway.

Hodges, had purchased $10 worth of gas in an automated cash transaction at the pump island but assigned the money to the wrong pump. When Hodges asked for a refund, the clerk told her she needed to fill out a form with her name, address and phone number.

“He told me it would take two weeks to get my money,” Hodges recalled. She demanded a cash refund and left the store to run an errand to allow the clerk time to find the money.

When Hodges returned a short time later, a second clerk handed her a $10 bill with a receipt attached. On the receipt, the first clerk had written “black lady big fat.”

Hodges said the clerk could have used a description of her car or clothing instead. She said it was her 6-year-old son who noticed the slight, which hurt even more.

Although they had apologized to Hodges, she wasn’t satisfied with the explanation because it didn’t sound like a sincere apology.

“The lesson they should learn is my money helps run that store,” Hodges said. “And I won’t be going back.” 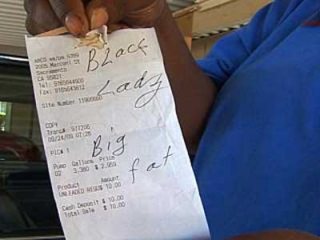