THE LONESOME STRANGER – The Best All Monkey Western You’ll Ever See!

If you only watch one all-monkey western this weekend, this should be the one!

There are certain things in this life that you just have to experience. For me, one of those things happened at around 3:30 am fifteen years ago, while I was watching battling a bout of insomnia with a dose of TCM (Turner Classic Movies). It was an all Monkey western. I missed the first couple of minutes, so I didn’t know what it was called, and it was only around 10 minutes long. The next day, I told my friends about it. No one believed me. I’ve been looking for it ever since.

The film is called The Lonesome Stranger. It was made in 1946 and it features a cast of all monkeys, with animated mouths and human voices. Among the voices is June Foray. If you don’t know the name, you’ll recognize the voice. She’s been doing voice over work since 1943 and is still at it today. She’s best known as the voice of Rocky the Squirrel from Rocky and Bullwinkle, but she’s been everyone from Magica De Spell on DuckTales, To Jokey Smurf, and even the creepy doll Talky Tina in the infamous 1963 episode of The Twilight Zone, The Living Doll.

Anyways… Here’s the deal. It’s your classic western story. Little Orphan Fanny can’t pay the rent and the evil Landlord is going to take her home. It’s up to The Lonesome Stranger and his Faithful “steed” Plastic to save the day. Watch it. Then watch it again. Then go get a snack. 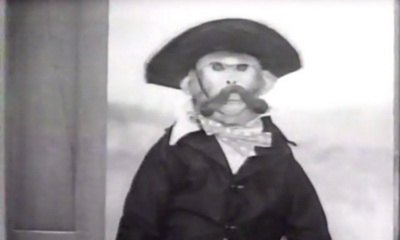