The Most Epic Obituary You Will Read Today

“He enjoyed booze, guns, cars, and younger women until the day he died.” 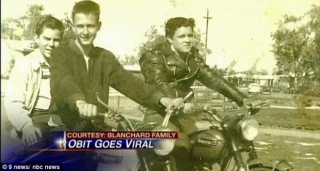 The man is… or was, Michael “Flathead” Blanchard and his obit was posted in the Denver Post on the 12th of April. Not wanting to leave it up to a sad family member or an inept newspaper editor, he took the time to write his own obit before his death. In notes that accompanied the obituary, he had stated that he was “weary of reading obituaries noting someone’s courageous battle with death.” and wanted people to know that he had “died as a result of being stubborn, refusing to follow doctor’s orders and raising hell for more than six decades.”

“He enjoyed booze, guns, cars, and younger women until the day he died.”

In reference to the people in his life who has passed before him, he had this to say:
“So many of his childhood friends that weren’t killed in Vietnam went on to become criminals, prostitutes and/or Democrats.”

Finally, and somewhat disturbingly, he left this note about his memorial service:
“He asks that you stop by and re-tell the stories he can no longer tell. As the Celebration will contain Adult material we respectfully ask that no children under 18 attend.”

Why is there not a beer commercial about this man already? 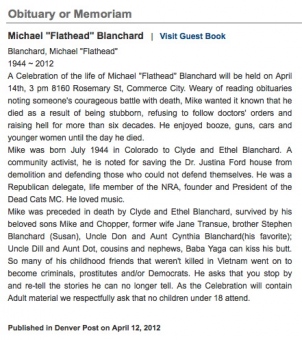