A warm, fluffy, buttery biscuit, folded in the shape of a taco filled with options like eggs, sausage, cheese or deep-fried chicken and jalapeno honey sauce. It has between 370 and 470 calories

Taco Bell has built itself into a stoner’s snack haven. When KFC made a sandwich just out of bacon and chicken, Taco Bell topped them with a doritos taco. In the last year, Taco Bell’s breakfast offerings have provided the stoned and hung over with an alternative to McDonald’s flagging quality and rising prices (Seriously… who the hell is going to pay $4 for a god damned egg mcmuffin that still costs $4 when you ask them to hold that god awful excuse for sausage they slap on to it…)

Their first breakfast innovation was the waffle taco, but now it is time for a new era to begin. The bell has just announced that they are canning the waffle and replacing it with a biscuit taco.

They are planning to go head on against the golden arches with a campaign that calls the Egg McMuffin a boring, routine food for the brainwashed. “In New York and Los Angeles, it is putting up propaganda-like posters for a place called “Routine Republic,” with one featuring a demonic clown holding what looks like an Egg McMuffin with the words “Routine Rules.”

They’ll even have TV ads starring people talking about how they used to like McDonalds.

Starting Thursday, you’ll be able to buy your own biscuit taco which is: a warm, fluffy, buttery biscuit, folded in the shape of a taco filled with options like eggs, sausage, cheese or deep-fried chicken and jalapeno honey sauce. It has between 370 and 470 calories, depending on the fillings. 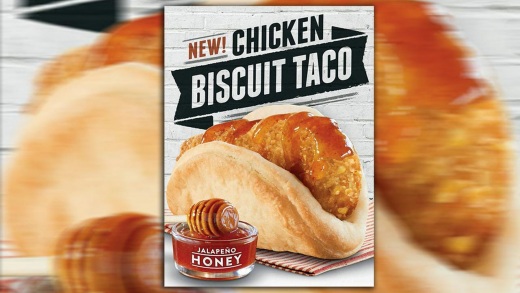