We aren’t sure if this is a statement on how all brands are really the same in the end or something like that, we just thought the pictures were really cool.

A couple hundred years ago, the most widely recognize symbols were usually things like the cross or the star of David. Now, it is Mickey is more popular than Jesus and kids all over the world know that their salvation lies at the foot of the golden arches, not a crucifix. Brands have become the new religion… but are they any different from each other?

Democrat or republican? McDonalds or Burger King, Microsoft or Apple… as time moves forward, these brands become more and more like each other. Graphic designer, Stefan Asafti, has just finished a great project where he mixes everything up to help bring a whole new perspective to some of the world’s biggest brands. 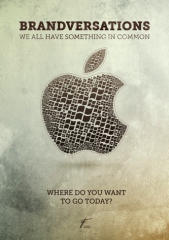 “I have switched the slogans of the brands amongst themselves, the goal of this being to give them further meaning and to create a sort of a confusion. It is surprising how logos can influence other logos. The truth is that each pair of rivals has something in common, that something which has helped them to build one identity upon the other, this way becoming the biggest brands.”