He’s been collecting for 20 years, but what’s more amazing is that Hull is not even watch “Doctor Who.”

49-year-old Rob Hull of South-Yorkshireman is the Guinness Book of world records holder for the man who owns the largest collection of Daleks. Hull was officially recognized for having the largest Dalek collection with an astounding 571 models. Everything from 6ft life-size replicas to miniaturized toys.

He’s been collecting for 20 years, but what’s more amazing is that Hull is not even watch “Doctor Who.”

“I’ve never been a fan of the show, but I have been enchanted by the Daleks ever since I saw one in a toy store as a child.

“My mum wouldn’t buy it for me, but I swore at that moment that I’d have my own one day,” say Hull.

He bought his first Dalek when he was twenty-nine.

When asked if his 43-year-old wife Dawn will be celebrating her husband’s new record, she had this to say, “I hate the bloody things and I’ve got a feeling this is only going to encourage him.” 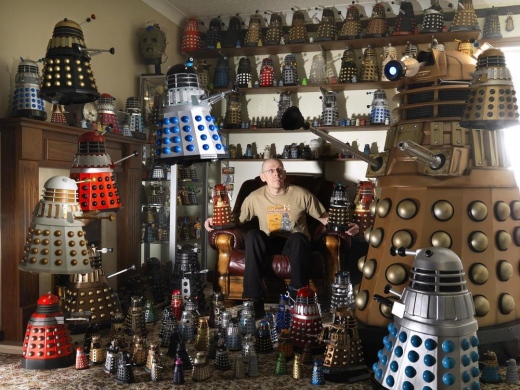