This Is What Happens When You Flush Your Pet Goldfish

Australia, a country that is particularly sensitive about invasive species (just ask them about rabbits), is understandably freaked out. These once tiny pets are growing to sizes upwards of 2 kilograms each.

There have been stories for years about baby alligators getting flushed down the toilet in New York City, and growing into giant, man eating mutant lizards. Meanwhile, here in Florida, we are being overrun by invasive pythons and monitor lizards that idiots have dumped into the Everglades. This recent find in Australia might not be as deadly as any of the other stories, but it’s still pretty damned impressive.

Researchers are concerned that abandoned goldfish could just be the nation’s next invasive, environmental threat. Most people don’t realize that goldfish will actually continue to grow, based on their environment. So, while they might not grow past a couple inches in a small fishbowl, there have been several one and a half foot long goldfish found in places like Lake Tahoe, where people have dumped their pets.

Australia, a country that is particularly sensitive about invasive species (just ask them about rabbits), is understandably freaked out. These once tiny pets are growing to sizes upwards of 2 kilograms each. Not only are they eating other animals’ food, but they are crapping so much that it’s creating dangerous algae blooms that can choke off many forms of wildlife.

For those of you who still think: “What’s the big deal? They are just goldfish!” Consider why scientists from Murdoch University are calling them “one of the world’s worst invasive aquatic species.”

“Once they are released into the water, they breed at a rapid rate, taking over the area. Because they can travel quite far, up to 230 kilometers per year, they’re incredibly difficult to eradicate. “ 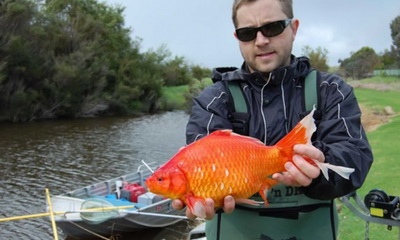