Trippy Wallpaper To Blow Your Mind Into The Weekend

Admit it, the first week after new years. You are fried. How are you even going to get enough energy to go out and do something you’ll regret tonight. You need a shock to the system!

Admit it, the first week after new years. You are fried. How are you even going to get enough energy to go out and do something you’ll regret tonight. You need a shock to the system! I can’t think of a better jolt than a heaping dose of Carnovsky!

But, if you can’t make it all the way over to the Direktorenhaus (that almost sounds like a dirty word), we’ve got a taste for you right here.

Here’s what the artists have to say and then more coolness below.
RGB’s technique consists in the overlapping of three different images, each one in a primary color. The resulting images from this three level’s superimposition are unexpected and disorienting. The colors mix up, the lines and shapes entwine becoming oneiric and not completely clear. Through a colored filter (a light or a transparent material) it is possible to see clearly the layers in which the image is composed. The filter’s colors are red, green and blue, each one of them serves to reveal one of the three levels.

Carnovsky’s exhibition at Direktorenhaus, Berlin, is structured in three different scales, from the large to the small, from an architectonic scale, to an object one, passing through the prints.

In the architectonic level one of the gallery’s rooms has been set up with a large installation made of wallpapers and colored lights: It is a sort of “fresco” made with contemporary technologies, “frescos”, but instead of being static, they are in mutable and fluctuating, capable of creating an ambient in continuous movement.

The represented subject is the antique theme of the metamorphosis intended as an unceasing transformation of shapes from a “primigenial chaos”.

For this purpose we have created a sort of catalogue of natural motifs starting with the engravings from natural history’s great European texts, between the 500 and the 700, from Aldrovandi to Ruysch, from Linneus to Bonnaterre.

A catalogue that does not have a taxonomic or scientific aim in the modern sense, but that wants to classify both the real and the fantastic, the true and the verisimilar in the way medieval bestiaries did.

In each image three layers live together, three worlds that could belong to a specific natural kingdom, but that at the same time connect to a different psychological or emotional status that passes from the clear to the hidden, from the light to the darkness, from the awakeness to the dream.

Besides the installation, there were presented some new limited edition RGB pieces, developed on the traditional playing card’s theme: a RGB playing cards deck and a series of lithographic prints of the “Horseman” subject. In each card there are printed three different playing cards: The overlapping of colors mixes up the forms in a way that it is difficult to recognize which figure is represented, an enigma that can be solved just through the use of one of the colored filters. 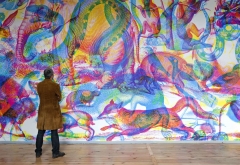 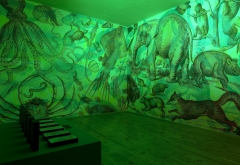 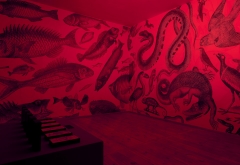 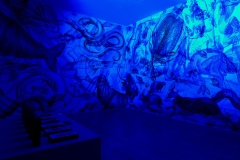