Watch What Happened Behind The Scenes At ‘The Muppet Show’

Check out this great live action of The Muppet Show created by the show’s crew as well as a glimpse behind the scenes at the last day of filming before the series ended. 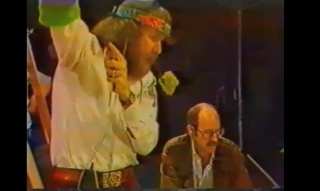 Chances are that if there is a Muppet story to be posted, we are going to be on it frogs on a fly. A little while ago we came across these two videos that were recently posted by a former camera man from the original Muppet Show, John O’ Brien. The first video, features the entire behind the scenes crew in a video they made just after the end of season one of The Muppet Show in 1976. The crew got together and performed their own complete show, but without any puppets.

The second video features five minutes of great footage from the very last day of filming on the last episode of The Muppet Show in 1980. It is great to see that the show looks like it was as fun to make as it was (and still is) to watch.

A little bit of fun by the crew recorded at the end of the first series/season of The Muppet Show in 1976 (I joined ATV in 1977 during Season 2) … I am not sure who was responsible for putting this together (I suspect Peter Harris had an input) but I’m sure someone will tell me.

A behind the scenes glimpse of the Muppet Show on it’s last day of recording at the Elstree Television Studios in 1980 on which I was privileged to work as a Cameraman.

Featured is Jim Henson and Frank Oz who were the main inspiration and creative forces behind the show.

Narrated by Peter Harris, one of the two directors on the show … it mostly reveals crew and cast having a very silly day as everyone said their final farewells. Richard Holloway (now Executive Producer on “The X Factor”) had been the Senior Floor Manager for the duration and it was probably inevitable that he became the victim of the flan flingers … he took it in great spirits.

This last day in Studio D was the culmination of 5 years work, fun and laughter on what was arguably the most successful Children’s Programme in the world at the time, having been sold to some 110 countries … it was the end of an era for many and the Muppets have gone on to become truly iconic.

P.S. A younger version of me makes a brief appearance at 4.26.