What If Zelda Was Set In An 80’s Teen Movie?

This amazing fan made trailer captures moments from some of the greatest 80’s teen movie you could imagine. There’s ‘Breakfast Club’, ‘Say Anything’, ‘Ferris Beuller’ and ‘Sixteen Candles’.

This is one of those things that you are just going to have to watch more than once. Imagine the game of Zelda, but instead of running from forest to village, it is the 1980’s and Zelda and link are in Highschool.

This amazing fan made trailer captures moments from some of the greatest 80’s teen movie you could imagine. There’s ‘Breakfast Club’, ‘Say Anything’, ‘Ferris Beuller’ and ‘Sixteen Candles’.

Check out the video below, and then right under it, check it out on a split screen with all of the great 80s source material they used to make it.

Here are the Official details on the vid:

n this charming critically-acclaimed tale of first love, Link (Jon Tomlinson), an eternal optimist and adventurer, seeks to capture the heart of Zelda, an unattainable high school beauty and straight-A student (Zane Bauer). He surprises just about everyone-including himself-when she returns the sentiment. But the high school’s over-possessive, megalomaniacal Principal Ganondorf (Dominic Moschitti) doesn’t approve and it’s going to take more than just the power of love to conquer all.

Perfectly capturing the essence of what it means to be a teenager in the 80s, Nick Murphy, Mike Sadorf, and Dom Moschitti reimagine one of the most celebrated video game franchises of all time with the heart, charm, and wit that only they could. It’s the legend of high school. It’s the legend of love. It’s The Legend of Zelda. 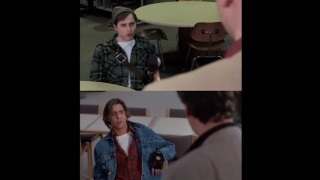