I for one would like to congratulate Burger King. After all… if these people are truly hungry, shouldn’t they be honored for providing them with Whoppers and Big Macs? They are feeding the hungry! 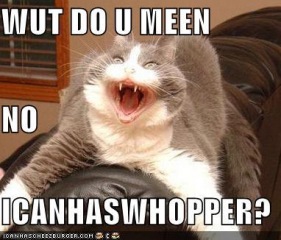 I would like to personally congratulate Burger King on their newest advertising campaign. They have caused me to laugh so hard today with a concept that is so inherently wrong and culturally insensitive that I that damn near shot my water out of my nose.

The campaign surmises that the only way to find the best burger between the Whopper and Big Mac is to ask people that have not tried either or have even heard of either. That meant that they had to find indigenous peoples in areas so remote that fast food had not polluted the bloodstreams of the locals.

Burger King refers to these people as: Burger Virgins

the campaign sought out armers in rural Romania, Thai villagers and residents of Greenland’s icy tundra. For the most part these are all considered severely impoverished people.

“What happens if you take Transylvanian farmers who have never eaten a burger and ask them to compare Whopper versus Big Mac in the world’s purest taste test?” one of the adverts asks. “Will they prefer the Whopper? These are the Whopper Virgins.”

The “undeniable” results of the chain’s “unbiased” global research – which involved “13 planes, two dog sleds and one helicopter” – will be unveiled in a documentary next week, according to whoppervirgins.com, the website promoting the campaign.

“If you want a real opinion about a burger, ask someone who doesn’t even have a word for burger,” states the site to a haunting theme of drums and pan pipes. “Watch the whopper virgins take their first bite.”

Not suprisingly, there are some pretty pissed off people out there throwing around words like… insulting and exploitative.

The Telegraph got to hear some of the less than happy people’s opinions:
“It’s outrageous,” Sharon Akabas of the Institute of Human Nutrition at Columbia University, told the New York Daily News. “What’s next? Are we going to start taking guns out to some of these remote places and ask them which one they like better?”

“The ad’s not even acknowledging that there’s even hunger in any of these places,” she told the Daily News.

The campaign has also stirred up a welter of online commentary. Brian Morrissey, writing on Adfreak.com, likens the campaign to colonialism and declares it “embarrassing and emblematic of how ignorant Americans still seem to the rest of the world.”

“It doesn’t get much more offensive than this,” noted The Inquisitor blog. “If visiting poor people in remote locations, some who would be at best surviving on below poverty levels and throwing a burger in their faces isn’t bad enough, it gets better, because they also ask the Whopper Virgins to compare the taste of the Whopper to a McDonalds Big Mac as well.

“It’s hard to place exactly where this begins on the level of wrongness.”

I for one would like to congratulate Burger King. After all… if these people are truly hungry, shouldn’t they be honored for providing them with Whoppers and Big Macs? They are feeding the hungry!

That being said, I do have a question. Was there a representative from McDonalds in this promotion? Who prepared the Big Macs? I have a feeling this study wasn’t performed with the highest of scientific standards. Perhaps a representative from BK would like to contact us and we will be happy to talk to report more on the situation.