Twilight Star Takes on Joan Jett Role in The Runaways

The film will revolve around Jett and Currie and follow them from the band’s meteoric rise as teenagers to their dissolution and disillusionment. 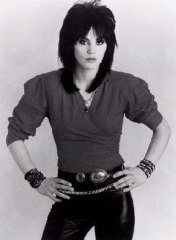 It looks like something good has come out of Twilight and her name is Kristen Stewart. Not only will she be playing the female lead in the upcoming “Adventureland”, but she’s just been named to play the role of rocker Joan Jett in the the new movie, “The Runaways.” The news came out today from the Hollywood Reporter.

Runaways, the rock ‘n’ roll biopic of the 1970s all-girl band will be helmed by video director Floria Sigismondi and Jett herself will produce.

For those of you who don’t know, The Runaways is not just the name of a great Marvel comic book. It was a major band that spawned some of the biggest singers of the late 70’s. Its members included guitarists Jett and Lita Ford, drummer Sandy West, singer-keyboardist Cherie Currie and bassist Jackie Fox.

The film will revolve around Jett and Currie and follow them from the band’s meteoric rise as teenagers to their dissolution and disillusionment.

The movie is eying a 2009 start and will work around Stewart’s commitments to the two “Twilight” sequels. The first one, “New Moon,” is expected to shoot sometime in first-quarter 2009, with Stewart reprising her role as Bella, the human who falls for a vampire.