Your Favorite Heroes Get A Super Serious Makeover

This is exactly how I picture my heroes would look after five years trapped in a cubicle.

Calvin Ma is an amazing artist with a style somewhat reminiscent of the art of Mike Mignola. He’s an industrial designer based out of San Francisco and he’s produced some amazing super hero sculpts that take a whole new angle on what we expect to see from our good guys.

With the exception of maybe Bat-Man, we are programmed to think of our heroes as the eternal optimists. Shoulders back, positive look in their eyes. We’ve never seen them quite like this though. Ma has taken Batman, Captain America, Spider-Man, Wolverine, He-Man and Lion-O and sculpted them with a dour, sullen, apathetic view. I’ll never look at He-Man the same way again! 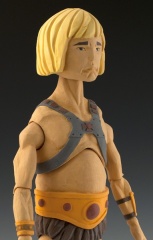